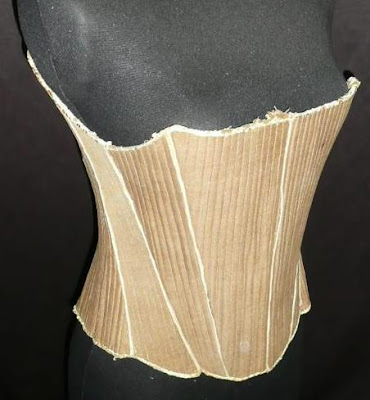 Just when you think something is rare, seldom seen, one of a kind, not thick on the ground!

These stays were listed at auction on Ebay (May, 2011), and the fact that the tabs are sewn shut and not meant to splay out over the hips seemed unusual and possibly the feature of a pair of transitional stays. It appears that the staymaker was coming late to the party and trying to adapt his old tried and true patterns to the new style. These had to be one of a kind. Linen with leather binding.

These stays were listed at the Karen Augusta Auction in March, 2011. 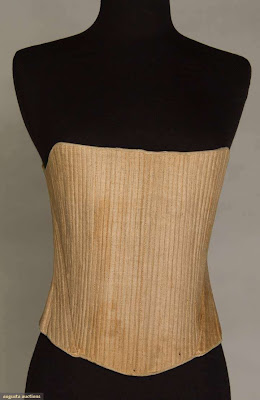 At first I thought the Ebay pair was a reselling of the pair from the Augusta Auction. The same brown linen and sewn down tabs. But the decorative stay tape is not the same and the binding of these linen stays is plain woven linen tape. Linen tape appears much less frequently than leather binding and more often in stays of a later date (4th qtr, 18th Century). So now there are two. 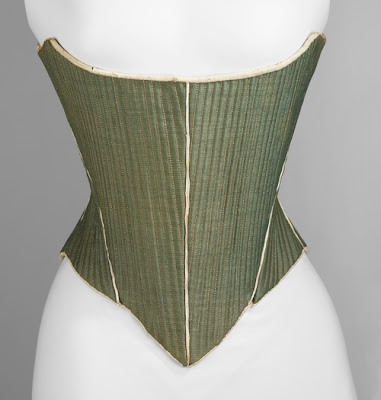 These stays from the Brooklyn Museum, now held at the Met in NYC, also has the tabs completely sewn down and in this view, the rising waistline of the changing gown style is pretty visible. The olive green linen worsted suggests the possibility that these stays were remodeled from an earlier pair. Green worsted was a popular covering for stays of the 3rd qtr. Worsted is less frequently found in the fashionable 1780s stays, where brown linen and cotton predominate as fashion fabrics.
Posted by Hallie Larkin at Tuesday, May 31, 2011