Money in the Bank

Often found in early newspapers of the 18th century are articles of interest printed in London and then reprinted here in the colonies. A little slower than the internet, but an effective way to keep up with world events, politics, news of note, and gossip.

Mary Hammond, a widow of a bankrupt man, pleaded poverty up until the end of her life. She left instructions that her stays and shoes were to be thrown into a ditch upon her death. A suspicious heir- in- law, decided to investigate and upon splitting open the stays found money and notes to the value of 1300 l. as well as a quantity of silver and gold coins.

As a personal item, with connotations of intimacy, the stays were obviously not handled by anyone else in the household as the sheer weight of gold and silver coins would have revealed that the stays were being used as a safety deposit box, hiding assets from creditors as well as family members. 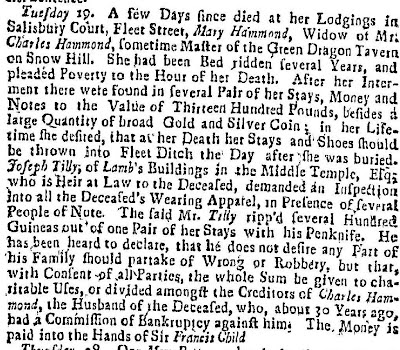